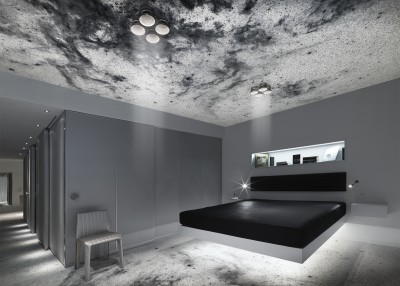 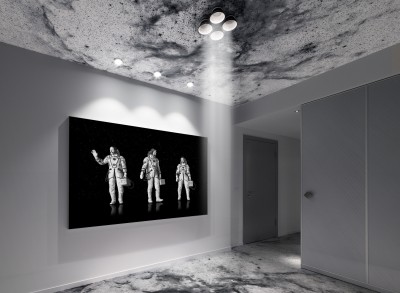 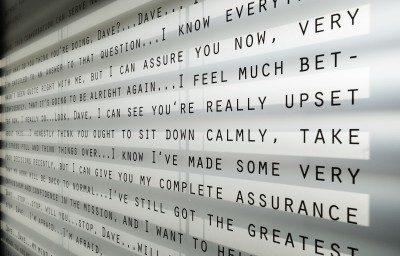 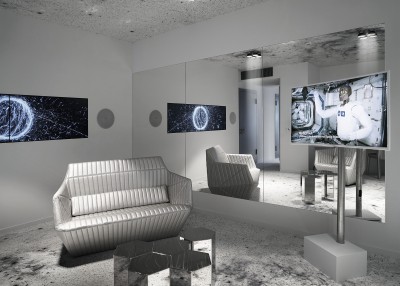 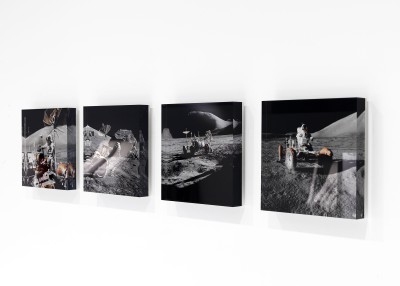 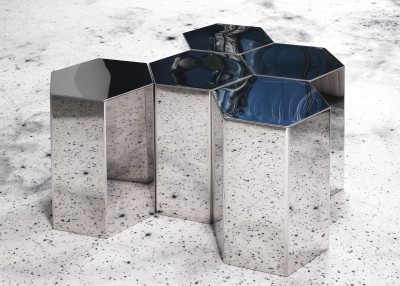 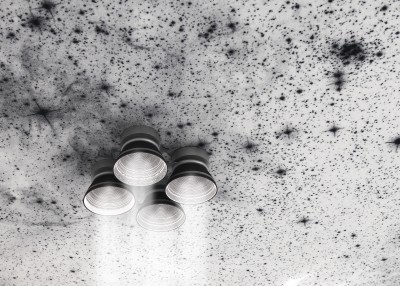 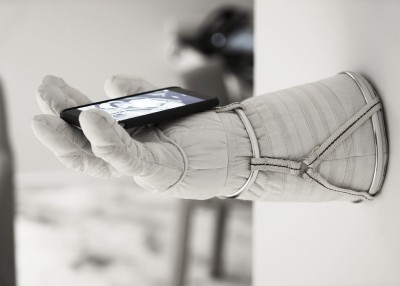 In October 2015 Michael Najjar unveiled the world´s first futuristic ‘Space Suite‘ at the Kameha Grand Zurich, Switzerland. The artist has created a truly out-of-this-world experience - an entire futuristic space station housed in a new hotel building. The basic idea underpinning the Space Suite is to create an immersive environment which makes hotel guests - or crew members - feel like they’re living on an actual space station. Critically, to achieve this feeling of total immersion, every view to the outside has been blocked to concentrate the guests’ sensory perceptions on what’s happening inside.

Entering the Space Suite, an automated female voice inspired by John Carpenter’s sci-fi film Dark Star welcomes crew members in 8 different variations confirms their login and gives handling instructions for the Suite. Guests are fully immersed in space, walking on carpet printed with high-res images from the Hubble Space Telescope, stitched together to create a new fictive Universe. Other quirky features include 3D printed spotlights modelled on rocket engines, a space glove at entry where crew members can place their phones and key cards, and handmade mock-ups of iconic rockets and space ships.

The bedroom or “sleeping module“ is covered by a semi-transparent foil which blocks outside visibility but allows light to filter through, reflecting text from the famous HAL 9000 computer in Stanley Kubrick’s 2001: A Space Odyssey. The bed is designed to look like it’s floating, while the mattress is shaped as a black rectangle reminiscent of the monolith from Kubrick´s movie. Crew members can relax with an IPod next to the bed charged with selected audio books all related to the topic of space. The sleeping module also features a bookshelf of novels handpicked by the artist, complemented by non-fiction and science fiction publications on space travel, technology and adventure.

The window in the ‘living module’ is covered entirely by a mirror – the reflected image interacts and interferes with real space, testing crew members’ perceptions, and making them interrogate the room space they are really standing in. The living module also features a curved TV screen with an inventory of over 20 selected movies from classics to the rare and unknown, all related to space. Terrestrial TV channels are a strict no-no, but guests do have a livestream from the International Space Station (ISS) and a 24/7 direct link to NASA TV.

The steam bath extends the Universe motif with a porthole window looking out into space and down on Earth. The light above the bath tub shows the surface of Saturn’s moon Encleadus, which scientists assume hides a gigantic ocean under its surface of ice. Four small square pictures are mounted in the dressing room displaying the famous Lunar Roving Vehicle and astronauts from Apollo 15, 16 and 17 on the Moon’s surface.

Michael Najjar has also installed three original large-scale artworks from his current ‘outer space‘ series, including the double screen video installation ‘orbital cascade_57-46‘ visualizing the ever increasing quantity of debris in space; the photo artwork ‘space voyagers‘ which portraits the space crew of TMA-14M who left earth in a Soyuz spaceship on 25th of September 2014 and the iconic picture ‘liquid gravity‘ which depicts the artist himself during spacewalk training in the huge hydrolab at Star City, Russia.

The Space Suite was commissioned by Kameha CEO Carsten Rath. All its features including furniture, carpets and lighting were designed by Michael Najjar who was given complete artistic freedom when creating the Suite. One day we will see hotels floating in space. What Michael Najjar has done at the Kameha Grand Zurich is to dock a floating space station in a hotel. The Space Suite is a sculptural artwork which has become a habitable zone.

In 2016 the Space Suite was nominated and shortlisted for the European Hotel Design Award for the best new Hotel Suite in Europe.

Disclaimer
Accountability for content
The contents of our pages have been created with the utmost care. However, we cannot guarantee the contents' accuracy, completeness or topicality. According to statutory provisions, we are furthermore responsible for our own content on these web pages. In this context, please note that we are accordingly not obliged to monitor merely the transmitted or saved information of third parties, or investigate circumstances pointing to illegal activity. Our obligations to remove or block the use of information under generally applicable laws remain unaffected by this as per §§ 8 to 10 of the Telemedia Act (TMG).

Accountability for links
Responsibility for the content of external links (to web pages of third parties) lies solely with the operators of the linked pages. No violations were evident to us at the time of linking. Should any legal infringement become known to us, we will remove the respective link immediately.

With our newsletter we inform you about us and our offers and events, art fair participations and exhibitions in galleries, museums and art institutions. If you register for our newsletter, we will save your e-mail address, first name(s) and last name, as well as any information you choose to provide on a purely voluntary basis. If you do not wish to consent to this, you can unsubscribe by using the link at the end of every newsletter.

You can revoke your consent to the storage of your data, e-mail address and the use of your data to send the newsletter at any time. This revocation can be effected by notifying us: studio@michaelnajjar.com

In the course of the further development of our website, changes to this privacy policy may become necessary. We therefore recommend that you reread this data protection statement from time to time.